Pregnant After TESE Surgery Due to Azoospermia Diagnosis 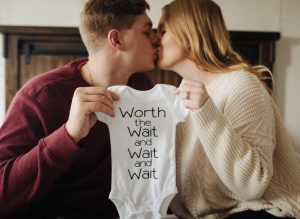 5%. That’s what we were told was our chance of having a baby. We were 21 years old when we first learned about my husbands diagnosis. After trying for nearly 3 years, we both knew in our hearts something was wrong, but azoospermia was not the diagnosis we were expecting, I’ll never forget the phone call from my husband, after he heard the results of zero sperm. We were crushed. After lots of referrals to different doctors, we finally met with a urologist specializing in reproduction. He was the first doctor to give us hope.

He recommended jumping straight to a mTese, which is a pretty invasive surgery where they cut open the testicles and take biopsies of the tubules hoping they will contain sperm. We were willing to try anything that could get us closer to our dream. He told us our odds and they were pretty awful, but we knew we had to try. My husband went in for his surgery and what was supposed to be an hour surgery ended up taking 4 hours. Afterwards his doctor came and told us that he found ONE single sperm during the procedure, but when we took the biopsy to the lab, they found nothing.

When we went to his follow up appointment, the doctor was confident that he did in fact see a single sperm and he recommended we do a second mTese, so 3 months later, we did. 16 sperm were found this time. 16 chances. Nothing changed medically during that time, no meds, no diet changes, nothing, except our prayers. A week after my husband’s second surgery and my retrieval, we learned that we had 16 frozen embryos. Our first transfer ended in a chemical pregnancy, but now we are currently 26 weeks pregnant with a little girl, from our second transfer. God defied all odds, even the doctors. I have been so thankful to both Him and Moms in the Making as going to my first Moms in the Making small group changed my life and my relationship with God.